Can you make something cool? We want to build a brand around the actions below and create a culture/following of people who do them.

Diverting is such a simple and helpful concept. Please make it known and popular! You might have noticed this, but some people tend to be very bad with money. They often spend without thinking, but the minute they’re asked to donate, they suddenly freeze and start thinking about their financial worries and reasons why they can’t afford to give. The college student who spent $45 at the bar or $120 on designer clothes is the same person who states earnestly that they’re a poor student and can’t afford to give. Retirees are “on a fixed income.” Recent grads “have student loans.” Everyone in between is either “getting married,” “has kids,” “has kids in college,” “has a mortgage” or is “saving for retirement.” All of these are often quite true, but that doesn’t mean they’ve stopped spending on trips to Vegas, new cars, clothes, etc.

This phenomenon of being “too poor to give” despite spending like someone who can certainly afford to chip in $40 is found at every age, from kids to retirees. So how do we change that? How do you help people realize that giving is more about prioritizing spending and diverting a tiny amount of it toward helping the underdog? There is no magic number in your bank account that will make you feel rich enough to donate, so what if people just look for ways to divert their normal spending toward causes they believe in?

Diverting is a concept that we like a lot and want to engage people in. The basic premise is this: In your wallet is $20. You are most likely either going to give that $20 to Starbucks, McDonalds, Exxon, Amazon, Expedia or any number of other corporations. But what if this time, you didn’t? What if tomorrow instead of giving it toward making other people wealthier, you diverted the funding toward something you believe in?

We need people contacting Congress in support of global poverty legislation! This is a simple act that has a profound impact. It’s not uncommon for a member of Congress to cosponsor a bill after as few as 7 people emailed or called their office in support of the bill. This simple act of civic engagement only takes 45-seconds, yet very few people do it. In their defense, most people don’t realize it matters. We want to change that and create cultures around contacting Congress. Heck, what if it was viewed as cool to contact Congress? Honorable to spend 45-seconds each week improving the life of a starving four-year-old. Your mission is to engage people in contacting Congress and build it into something fun that people actually get excited about doing. What if there were drinking games at parties that involved calling Congress (advocacy shots!)? What if teens at skate parks were sitting on their boards taking a break while emailing Congress via their phones?

3. Donating via the Cash or Venmo Apps

One of the biggest challenges of getting people to donate isn’t finding compassionate people… It’s finding people who will take a minute to write a check or fill out their credit card information on the site. We get it. We get tired of constantly entering our credit card info on sites too! However, people’s tendency to avoid taking the time to donate prevents millions of dollars from going to great causes. So imagine our excitement when we started noticing that people really like sending money to each other via phone apps and they don’t have to enter their credit card info to do so. If they can type “$theborgenproject” in their Cash App then they can donate. We want to promote this! Very few people know that they can donate this way and your mission is to engage people in it. 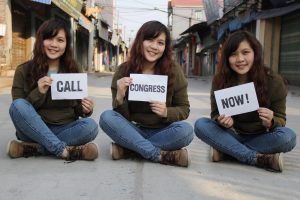